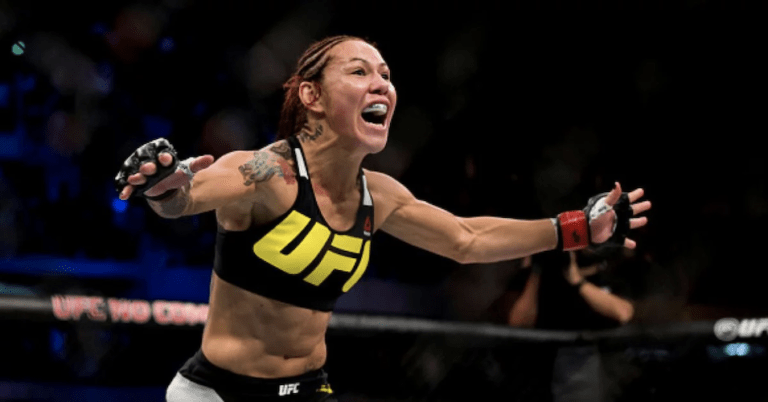 Cris Cyborg was born in Curitiba, and now lives in Huntington Beach California.

Cris Cyborg is a force to be reckoned with when she steps into the Octagon. Her aggressive style is renowned and she has won every fight she has fought since 2005. It is not surprising then that many potential opponents have made excuses to avoid meeting her in the cage, but who could blame them? She is the most powerful female MMA fighter and doesn’t give a moments relief from the start of the fight until the end, many of which have been TKO.

She has a strong christian faith, believing that if she does 90% of the work, God will do the last 10%. She loves her career and lives un-extravagantly, focusing on her training and the people she loves around her. In light of her suffering from online trolls and nasty comments made by figures such as Ronda Rousey and Dana White (head of the UFC) both of whom alluded to her being a man and taking steroids, she has been on an anti-bullying crusade. She is also an advocate for empowering women with her girls only retreat @girls_pinkbelt, and mentions to us how important it is that she surround herself with positive and inspiring women.

Cyborg’s walking weight is around 170 lbs, but she fights in the 145 lb division (featherweight) with the UFC. This is the highest division they have for women, and despite struggling with her weight, she has never missed a fight because of it.

There has been much talk about her extreme weight cuts, but the head of the UFC, Dana White, is slow to be convinced of the necessity to add higher weight divisions for women. There are 8 divisions for the men, but only 4 divisions for the women. Also weight cutting is more difficult and dangerous for women because of the way we hold water. This begs the question : what are athletes such as Cyborg sacrificing in regards to their health for the opportunity to play the UFC game?

The first fight for her is to make weight. In 2016 she was 18 lbs over her weight division 4 days before the weigh in, and she still made it. This is indicative not only the struggle to cut weight, but also her strength of will. Cyborg would love to see the weight categories open up and give more women the opportunity to become involved. Unfortunately, for some women it is just too hard to make the low weight divisions, echoing Brittney’s Elkins comments made in a previous article.

“I don’t fight with anger, aggression is not anger.  For me it is a sport. I do not hate the girls I am competing against”.

Cyborg began her journey at Chute Box Gym in Curitiba, Brazil, where “it is an honour to be known as an aggressive fighter”. At the age of 9 she was playing handball at an international level, often with boys teams, until she was scouted to begin training at Chute Box. Since then she has trained in Boxing, Muay Thai, Wrestling and Brazilian Jiu Jitsu (BJJ). People train Martial Arts for many reasons; competition, fitness, confidence, friendship building etc. As with anything, just because you are good at striking doesn’t mean you will be good on the ground, and yet Cyborg has managed to combine and develop them into her unstoppable game. She is the ultimate all rounder and therefore is a fabulous Mixed Martial Artist. With the knowledge of so many Martial Arts, we asked her which one is the best for self defence, and she reckons BJJ is the ‘most complete’ for women.

There has been talk of a fight between Cyborg and Amanda Nunes, the current reigning champion of the bantamweight division (135lbs). Cyborg wants to be the best, so wants to fight other competitors at their best. If she fights Nunes she wants to fight her ‘strong’, so not before Nunes has fully recovered from her recent fight with Pennington, where she may have hurt her foot. It is important for Cyborg that she make the best fight for her fans.

In the build up to a fight Cyborg has a gruelling training regime, training 3 times a day for 12 weeks with strict nutrition focusing on quality, with no processed food at all. Interestingly she prefers to train with men, which she says is because they are not as emotional as women, and there is no chance that she will ever compete against them in the cage. She told us that rest is a part of training (to all you over-trainers out there): “It is important to realise that a rest day is a part of training.  Sometimes my coaches send me home from training because otherwise I will overtrain.’ She has learnt to have one season on and one season off, so that her body can fully recover.

“The greatest challenge I have faced in my career is dealing with the negative comments made by some of the biggest figures of the sport, and how they have influenced fans of the sport. I have had jokes made about me looking like Wanderlia Silva in a dress, all the way to alleging I would be the first UFC fighter to remove my penis to make weight. These types of jokes by high profile figures within the sport made it appear acceptable to fans to make similar comments. It is a challenge I have to face almost everyday thanks to social media.”

Cyborg was recently accused of striking Angela Magaña at a UFC athletes retreat after Magaña provoked her with sexually explicit and offensive remarks. Cyborg pegs her anger as a reaction to the online trolls and harassment she endures. After being fined for the incident with Magaña, she avoided a jail sentence and is creating a national anti-bullying program. Cyborg seems to get a lot of harassment. I don’t know if this is normal banter or it is taken too far. Because of her great success and seemingly undefeatable game, she becomes all the more of a target for people who are feeling insecure. I guess the more unshakable you seem the harsher the criticism and judgement from other people as they try to rock the boat.

However, she has plenty of support. “Curitiba is very supportive of my career.  When I made my UFC debut over 50,000 fans from my hometown showed up to watch my first fight in the octagon.” Cyborg tries to ‘put [herself] in a position where both inside and outside the gym the women around [her] are able to inspire and motivate each other. She is very positive and tries to take it all in her stride.

There are a lot of expectations placed on women in MMA, particularly from institutions like the UFC. Much of Cyborg’s harassment has been rooted in the fact that she is built more powerfully than the average woman. Whilst this has been part of her domination of the division, it has also become a springboard for people such as White to disparage her, who in 2014 said that Cyborg looked like Wanderlei Silva in a dress and unkindly mimicked how she walked. These types of comments intend to hurt and isolate, and point to the deep rooted sexism that White emulates, an archaic, outdated and frankly offensive perspective. Women have only been in the UFC for 5 years, and many people still don’t like to watch women fight, but mostly because they are not used to it. I don’t see any difference between watching a man fight a man, and a woman fight a woman. They are all fighters. However, this is not an attitude reflected everywhere and woman still seem to need to have sex appeal in order to appeal at all. But since when was a real fight sexy?

Although she has been tested positive twice for banned substances in the past, (but never steroids), only one of them led to a suspension. Here it was argued that it was meant to help her lose the last bit of weight, and the guilty vote could have been avoided had she done her paperwork. Cyborg has been clear for her entire time with the UFC. White spent a lot of time reinforcing the notion that she was using steroids because she looks a certain way, and has influenced a lot of the public in their opinion of Cyborg. However she is practically a model employee. She trains hard and is clearly a lovely person. But she wins her way, and she doesn’t give in. This is very threatening to someone like White, as he doesn’t understand that kind of strength.

Cyborg is able to step back from the situations she finds herself in and make insightful observations. She clearly thinks through her decisions and perspective, making up her own mind about how she feels about issues, taking the time to think.

Cyborg appears to be looking towards boxing as her next challenge, and in interview taken at a Cecilia Braekhus’ fight, she says it was ‘her dream’ to box. I am sure we will continue to see great things from Cris Cyborg.

((P.S. We have a chocoholic in the house! To deal with hormonal changes she eats loads of chocolate!!!))

Written interview with Cris Cyborg with Women Who Fight