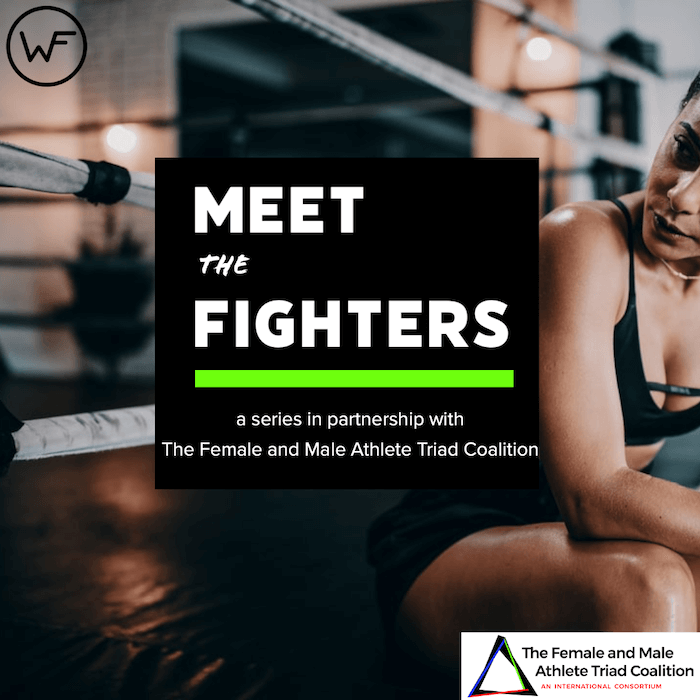 A personal story from Adrianne Phebey, a boxer.

Please see resources at the end of the article.

In boxing, the general thought process is “the lighter you can get; the better”. As a short but unfortunately “ heavy-boned” female boxer, I was often told that I wasn’t very strong and that I would be much more successful at 60kg (some even saying 57kg) as opposed to the 64kg I would box at. It sounded sensible and I, like most boxers keen not to leave any stone unturned, was up for the challenge.

I managed to get to 61-62kg at my lightest with a healthy, unprocessed diet and an enjoyable exercise regime that included my evening boxing sessions and morning strength training and HIIT/sprint workouts. I was working on the Wards as a newly graduated Physiotherapist, so my job was also active.  I felt great; my performance skyrocketed, and so did my confidence. The better I felt, the more I trained.

But then I started getting lots of soft tissue injuries. First my wrist got painful and I couldn’t punch for a few weeks, but “that’s just one of those things…” Then my hamstring stopped me running for a while, “but I had been running a bit more than usual because of my wrist”. Then my Achilles, my hip flexor, sometimes my shoulder… This was unusual. But I brushed it off, worked around them and cracked on. I now know that lack of energy availability influences the female sex hormones that are so important for soft tissue health as well as recovery. Low oestrogen and progesterone due to energy deficiency can put you at higher risk of tendon issues (Mountjoy M, Sundgot-Borgen JK, Burke LM, et al. 2018).

Around the same time, I started experiencing digestive and skin issues that I didn’t remember suffering with before. I would get awful cystic acne on my jawline, flare ups of eczema and awful stomach cramps and disagreements with food. I went to the GP for advice and it was recommended that I cut out gluten and dairy to see how I went. It helped, but I was also finding that dried fruit and coffee were also a no go.  My list of food to fuel on was shrinking and my GP suggested that I perhaps had IBS and that was that. In hindsight, it made perfect sense; if you don’t have the food intake to properly fuel your normal biological functions (ie digestion), things stop working properly.

I had been on the progesterone only pill for a while, but noticed that my mood was changing, and I was finding it harder and harder to keep my weight down. I would have sporadic windows of low mood and anxiety, which as a very happy-go-lucky girl was very unusual for me. I was also having to cut my calories down lower and lower to maintain 62kg. A quick google search suggested that this was a potential side effect of the pill I was on, so I came off it with the expectation that my symptoms would resolve. As every woman knows, oestrogen and progesterone can influence your mood. Low levels of these hormones reduce the feel-good hormone (serotonin) produced by your body, leading to lower mood and increased anxiety. Serotonin is produced when exercising, leading those with episodes of anxiety/depression to up their training as a method to help stabilise their mood. As you under fuel for high levels of training, your metabolism can tend to slow as a protective mechanism. As a result, it can get more challenging to lose weight.

My periods stopped when I was on birth control, but I was assured that this was normal for a Progesterone Only contraceptive and they would return when I stopped taking it. However, 6 months after taking my last pill I still had had no period. I went back to my GP, who ordered blood tests but advised that it may take up to a year for things to normalise. I had lots of blood tests throughout one month to account for any fluctuations, but all of them came back with incredibly low oestrogen, progesterone and FSH. I was given a working diagnosis of Polycystic Ovarian Syndrome (PCOS) and offered the combined contraceptive pill to “kick-start” my cycle. Knowing that the combined pill would offer me nothing more than a withdrawal bleed and a ton of unwanted side effects (Joy, E., De Souza et al., 2014), I politely declined and was sent on my way. I was so relieved to finally have an answer for all my symptoms (PCOS often causes irregular or absent periods and weight gain. Mood changes are also not unheard of) but I was frustrated that I still did not have any solutions.

I read up lots on PCOS and had heard that a low carbohydrate diet was the key to keeping the symptoms at bay (one common symptom being weight gain). I dropped carbohydrates from my diet (which I now know were already far too low for somebody as active as myself) and hoped for the best.

2 years later, still no period. Back to the GP again to argue not having the combined pill and beg to be seen by an Endocrinologist. One of the reasons I gave for not having the pill (apart from the lack of evidence backing that it would help me) was that I was fearful about gaining more weight which would affect my boxing. This was included in the referral to the Endocrinologist which was bounced back with a letter of refusal stating, “It seems Adrianne needs to eat more and train less”. That was it. No further support, explanation, or information. I didn’t understand. I knew about what was then more commonly known as “Female Athlete Triad Syndrome” (Triad*), but I couldn’t possibly have that; I didn’t have an eating disorder – I wasn’t even close to being skinny.

Many athletes with RED-S and the Triad* aren’t skinny and lean as people would assume. Endearingly described by Renee McGregor as “fluffy” in her podcast linked below, these athletes struggle to build the lean muscle that they expect due to a lack of nutrients/energy to be able to. The result? Athletes up their training and drop their calories to continue the mission of achieving a lean, athletic physique… It’s a vicious, unsuccessful and dangerous cycle. (Melin, A., Heikura, I., Tenforde, A. and Mountjoy, M., 2019)

A few months later during the off-season, I was out running in the forest and suddenly got a searing pain in my foot. I later found out that I had sustained a stress fracture in my 4th metatarsal. Low oestrogen is strongly associated with reduced bone density. I was lucky that this was just my foot. Other common stress fracture sites can include the femur (your thigh bone), your pelvis and your spine.

This was the penny dropping moment for me; “perhaps I do have the Triad*.” Knowing what I know now about RED-S, I am so shocked that this wasn’t picked up on any sooner. I was quite literally a walking red flag. Thankfully, I found an amazing Sports Nutritionist who explained things so clearly to me and got me back on the right path. Although I sit heavier, I am now leaner, stronger and healthier than ever before, and my periods have never been so regular and easy! Oh, and the best bit; I’m not gluten and dairy intolerant at all and can now enjoy my coffee and cake without the fear of being destroyed for 3 days.

My own experience has shown me that there really isn’t enough awareness or support about the diagnosis and management of the Triad and RED-S*. Multiple GP’s missed it, my coaches missed it, and I as a healthcare professional and athlete missed it. I think particularly in combat sports where weight is such a huge factor of competition, more needs to be done to educate coaches and athletes about the risk factors, signs, and symptoms of the Triad and RED-S*. I wrote this for anyone who may be experiencing similar symptoms, and for any coaches or Professionals who may be in the prime position to spot these symptoms in Athletes. I was in denial for a long time about there being any issues – talking about a lot of these topics are taboo (who wants to talk about periods and bloating with their boxing coach?), but I urge you to have these conversations and get the help needed ASAP. I’m out of the woods now and relatively unscathed – If I hadn’t had sought help, I may have been in a much worse situation.

This is a link to a Podcast about RED-S by TrainBrave. It explains the condition better than I ever could and has been the best resource I’ve found so far. Whether you’re an athlete, parent, coach or Healthcare Professional, I urge you to give it a listen;

*edited with permission from the author

Melin, A., Heikura, I., Tenforde, A. and Mountjoy, M., 2019. Energy Availability in Athletics: Health, Performance, and Physique. International Journal of Sport Nutrition and Exercise Metabolism, 29(2), pp.152-164.

Melin A, Tornberg ÅB, Skouby S, et al. The LEAF questionnaire: a screening tool for the identification of female athletes at risk for the female athlete triad. British Journal of Sports Medicine 2014

What is an eating problem? 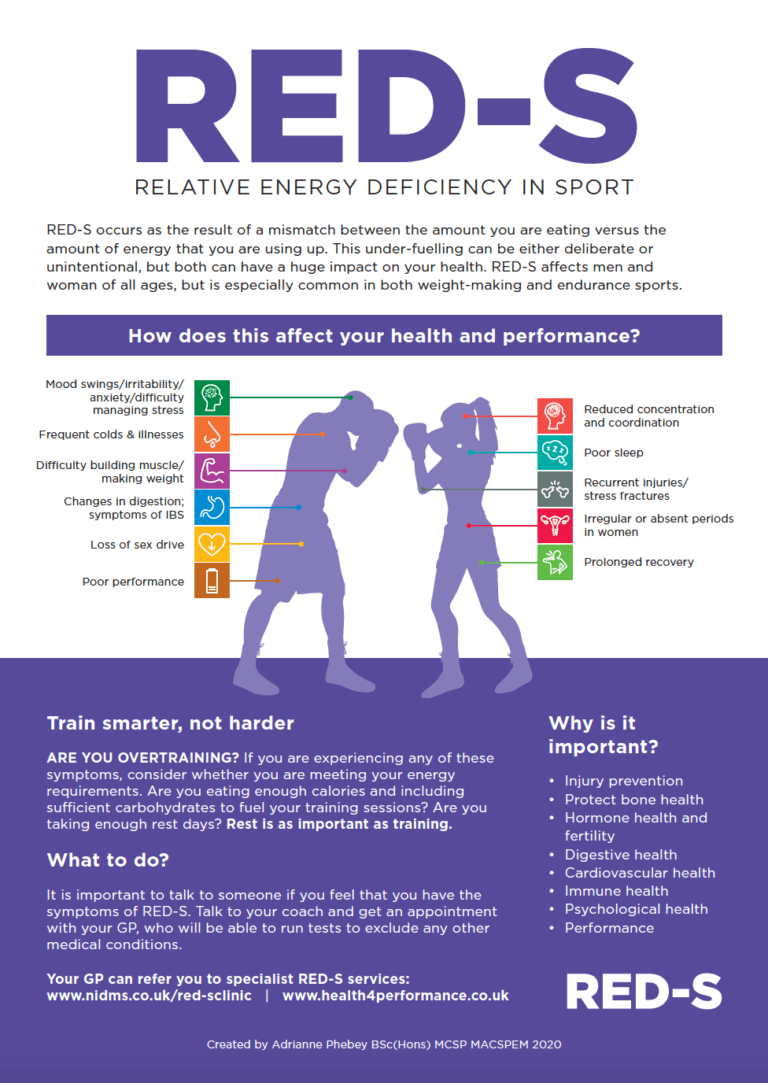 The Female and Male Athlete Triad Coalition, a non-profit 501(c)(3) organization, represents key medical, nursing, athletic, and sports medicine groups, as well as concerned individuals who come together to promote optimal health and well-being for athletes and active individuals.

The Coalition developed from the international, collaborative desire to support cultures that promote healthy athletic environments, establish public policy, effect change in national and international governing bodies, eliminate inappropriate dietary treatment practices of athletes, provide education about the Triad, and determine the scope of the problem through research.