“I would be happy for either of my kids to get involved in boxing, knowing the life skills and discipline it entails. Like running, boxing is one of those sports that everyone thinks they can do because it looks simple yet do not appreciate how much work goes into the end product.” 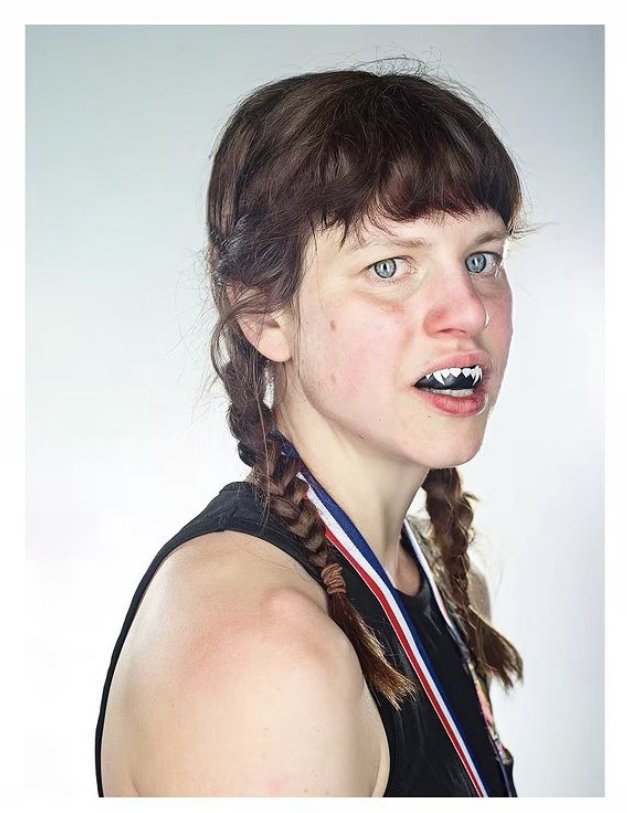 What was your experience and your journey?

My closest encounter with boxing until I was 28 had been my brother randomly giving me a pair of gloves for xmas. Classic sibling mucking about resulted in him punching me in the mouth with them on Christmas Day. A true story and rather painful given my lip piercing at the time! I remain convinced my brother would make a cracking boxer if he ever decides to stop being the most successful British fencer around. Google Richard Kruse and tune in for him at the next Olympics.

My background is solidly as a runner who somehow competed in cross country races wearing a pair of green flash plimsoles at age 11. With various turns in the road I now run for two clubs @trentparkrc as a V35 (veteran) or masters as it sounds better. I also got to represent the Police UK running team against the RAF and civil service in cross country.

The closest I got to combat sports as a kid was karate which was not cool like ‘Cobra Kai’ or the ‘Karate Kid’ back then. My brother had an aptitude for it but I couldn’t learn long sequences for kata and remember punching a girl who was showing off for her Mum. Apparently that was not the objective and where’s the fun in that?

My parents encouraged us to try all sports and I’ve done a real cross section from horse riding to pole vault but there are no boxers or police officers for that matter in my background.

I’m afraid I’m not one of those stories of how boxing got me off the couch as I was  fit (no one does marathons for fun without some fitness) but it does show you that in your late twenties you can find a whole new sport and compete in it. Besides normal cardio fit and fighting fit are very different things. At the time I was into obstacle course racing and wanted to do as many Tough Mudders, Tough Guys and Spartan races as I could. 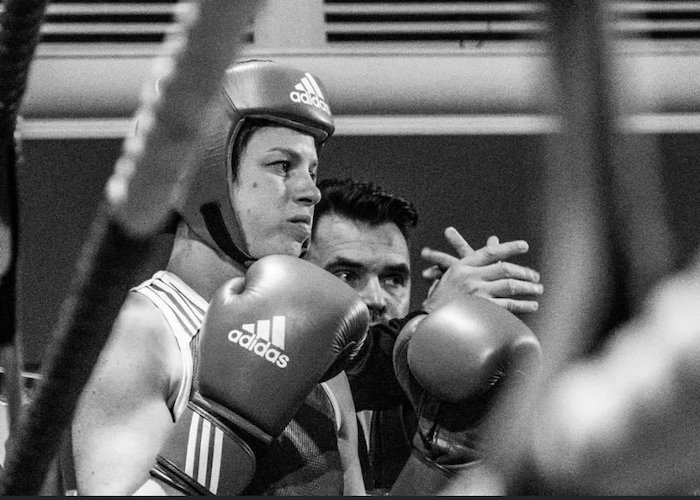 When was your first boxing class?

This links to my career as I had joined the police family previously in different roles but once starting in a particular police station I made a friend who loves lifting weights and baking cakes as much as I love running and baking cakes. He had been boxing at the Hendon boxing gym which at the time was the home of police boxing for the Met Police and told me ‘you’ll like this’. I took a buddy along @perky_87 so we could be newbies together and as much as climbing those stairs was a bit like going to the gallows as soon as I got in the ring it was almost like meeting someone you fancy for the first time. That same night I was in Camden seeing Trombone Shorty with @kimmy and telling anyone who would listen that I wanted to box. She got dragged to training too as I got the bug.

My first club did a lot of sparring and always had a ring running with others doing drills and tech. It was not as fitness driven as my current club with our epic circuits but installed that I was not there to do a bit of conditioning and wanted to have a bout. I met some great boxers and coaches, most of whom I’m lucky to know today @muzzyjujitsu_pt , @thelancziwilson , @mrclinchy86. They will all tell you that I was fairly ungifted at the beginning, my nose bled every session and I didn’t much mind blocking shots with my face. I always came away feeling like I had walked through fire and had not burnt. Boxing does make you walk a bit taller and puts back everything that life knocks out of you.

What were your thoughts before you arrived, your fears, your anticipation?

My memories of fears are more linked to preparing for my first bout than just attending a session. Of course it can be daunting approaching walking into a boxing gym as the only girl however if you show you are there to train and learn people should make you feel welcome. 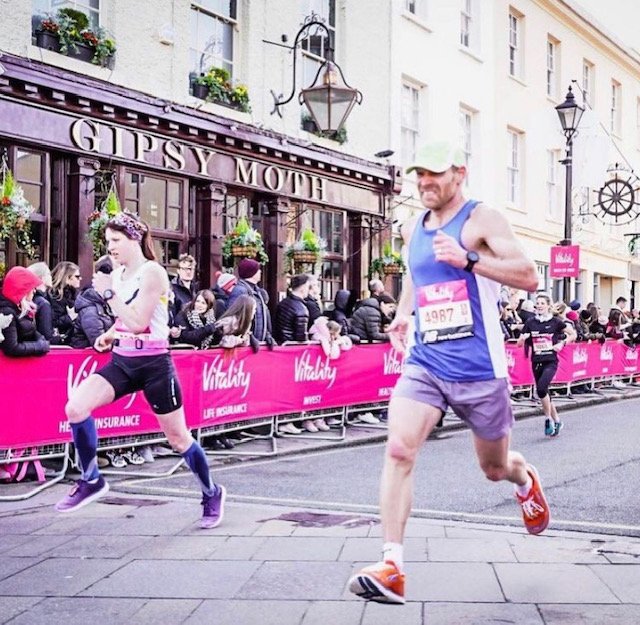 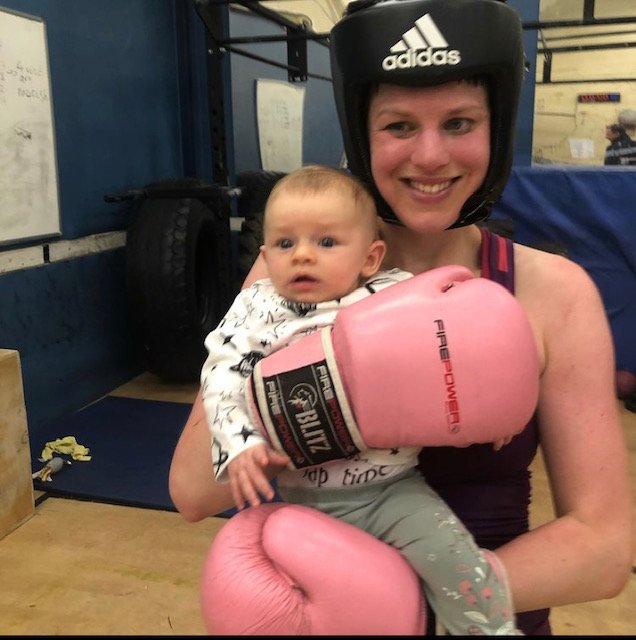 Why did you begin, and what did your friends say?

Although it has not been a hundred years since I started, attitudes to women’s boxing seem to have changed in that time. My family reacted with some disappointment when I announced I was going to be competing in the Lafone Cup (oldest police boxing competition in the world) because they were hoping I was going to say I was either getting engaged or having a baby. It went down like a real lead balloon but don’t worry I’ve now done both those things! I can’t say they are boxing fans now but are willing to watch my bouts on DVD knowing the result in advance. They did come to a couple of shows too.

I would be happy for either of my kids to get involved in boxing knowing the life skills and discipline it entails. Like running, boxing is one of those sports that everyone thinks they can do because it looks simple yet do not appreciate how much work goes into the end product.

My husband @nick.1985 has been to every fight of mine that he can and says it is like going to watch his football team. Win or loose he’ll be there.

It is amazing that @englandboxing arrange girls only sparring days and Instagram as a whole can be a really positive place for women’s boxing. You can get lulled into a false sense that everyone thinks it’s normal for girls to box when we are not there yet. The questions such as ‘don’t you like your face?’, ‘why isn’t your nose broken’ etc have died down over the years. There is more kudos among colleagues telling them you box than like to run round muddy fields and it helps with physical confidence in our line of work. Remember if you feel less than confident going to train as a girl then imagine turning up for sparring pushing a baby in a pram! People really stare then. 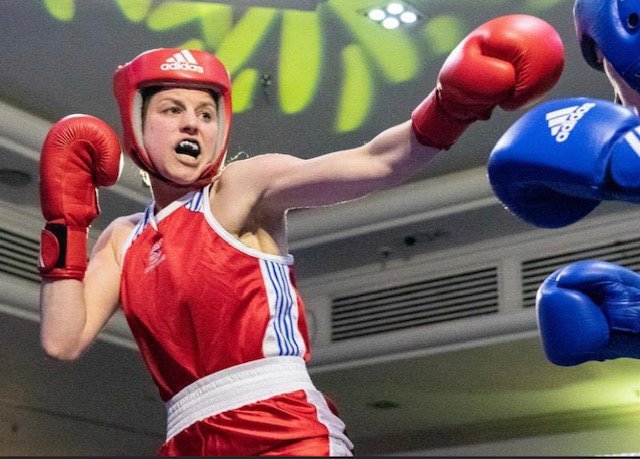 What did you expect? Was it a shock?

This question should really be ‘when did you stop being terrible?’. So I started boxing, loved it, and had two bouts which I lost. The first I came up against the ‘boxer of the night’ and the second I went up a weight category to get the stuffing punched out of me. At that point I was fed up and wasn’t sure if I should stick to running which I was actually good at. My club had also shut its doors as our building had been knocked down.

I signed up to a coaching course with England Boxing and did my Level 1 which built my confidence up again. It also made me think a lot more about technique.

Even when I lost my first bout I found that I liked boxing in front of a crowd. To this day I find the weight cut and walking out harder than fighting. The latter purely because of butterflies but getting a good walk out song and using that nervous energy helps. I’ve got to touch on making weight because it is a big part of the sport if you are not just a recreational boxer and want to compete. I know for a lot of women weight is built up as a scary monster and realising that you have to hit a number on a scales or indeed being weighed in front of others can be quite triggering.

I personally find the boxing world quite liberating as in you openly talk about weight and it’s not this shameful overly emotional subject. I’ve boxed at 3 different weights now and done catch weight contests. None of these were an unhealthy weight for me and you learn where you are at your best. The trouble is what you weigh will reflect the size of the opponent standing in front of you. I do think boxing has improved my attitude to nutrition and I eat far better than I did in my 20s.

The real game changer was moving for work and meeting my coach @dannyshannon5676. A good coach and boxer relationship cannot be underestimated. They can see ability and bring out the best in you even when you had looked like a walking punch bag in your last fight. By the time I walked out for bout no. 3 I was so hungry to get in there that my opponent’s corner threw in the towel in round one and I was a totally different boxer. Two weeks after that I won my Lafone Cup final and who doesn’t like a redemption story. 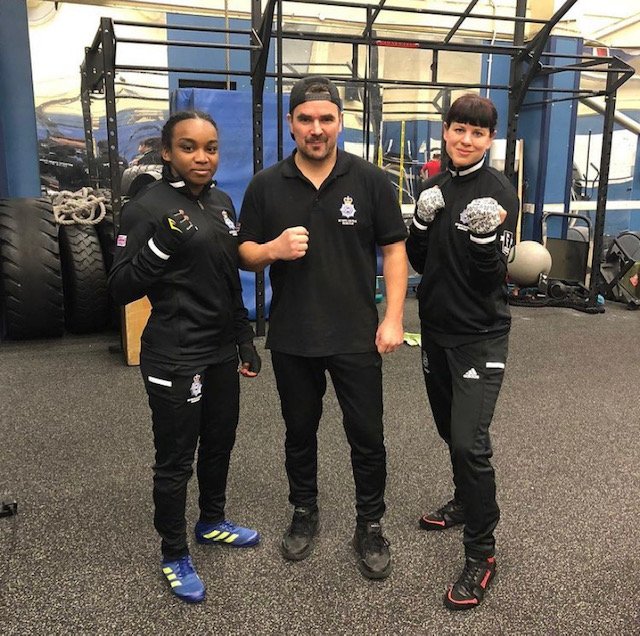 I became pregnant with my little girl and instead of this being the end of the story as it sadly is for a lot of people with their sports, it actually was the making of me. I found that breastfeeding and training during mat leave turned up my fitness to 11. I wouldn’t say I bounced back because I grafted and actually improved when it wasn’t something I knew that could happen. I did my own research and understand that being a Mum can transform who you are as an athlete and give you totally different motivation. Even if I have permanent baby brain!

Whilst I was pregnant I met @simonemindovermatterboxing after reading Anna Kessel’s book ‘Eat Sweat Play’ about girls in sport. There was a chapter on breastfeeding and boxing which featured Simone’s class where women could box with their babies at the gym. This blew my mind that you could still push yourself in a safe way (not just do fluffy pregnancy classes) and be a good role model. I sought out Simone and have trained with her through 2 pregnancies. Also more recently via Zoom and a shout to @bantamboxer for all the early morning sessions in lockdown to keep boxing even when gyms were shut.

So post Baby Scarlett I got to represent the Met Police not just box for the area in which I work. It was a little crazy looking back to when I was pushing my buggy to various gyms for sparring whilst on maternity leave. I only got asked to leave from one club though! I did my roadwork with a running buggy and Scarlett was ringside at 6 months old when I competed against the army at our dinner show.

Since then there have been other bouts but I also set up a boxing fitness club at my work. My angle was actively competing at the time I got to focus sessions around my opponents and have a go at coaching. They gamely took on all my sessions, stairs sprints, park workouts and really hope to get things started again when we can train together again. When you are into your sport it makes sense to play it forward and help others. @metpoliceboxing does a lot of outreach work in communities too and I want to get my coaching Level 2 one day to be a part of that story.

I have recently had a baby boy in lockdown and have yet to see if this will change my boxing again. He has nearly boxed himself as I only found out on the week of my last scheduled bout.