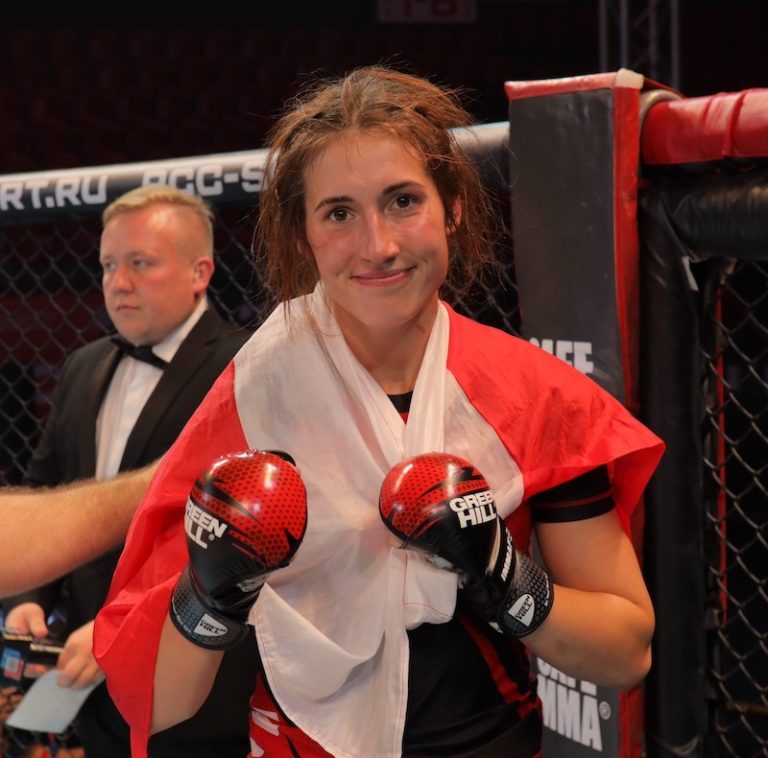 Sara Jóźwiak was 15 when, while shopping with her mother, an aggressive man blocked her way home. The situation then escalated when he pulled out a knife, and threatened passersby. With the help of two other men, Sara managed to take the man to the ground, control him with Brazilian Jiu-Jitsu techniques, and prevent him from escaping until the police arrived. Her martial arts experience allowed to her to protect herself, her mother, and everyone else in the area*.

Sara is an IMMAF European Championship silver medallist. Representing Poland, she is a respected mixed martial artist. And at just 22-years-old, has a bright future in the sport.

She described the terrifying situation with the knife-wielding man in detail: “Two men saw it and decided to help, so we all took it (the knife) away from him and put him to the ground… He was trying to escape so I caught him with a BJJ grip and held him until the police arrived.”

Brazilian Jiu-Jitsu was first developed by Helio Gracie. Helio was a relatively small man, and not physically strong. This meant he focussed on developing techniques which used leverage instead of power. When his son, Royce Gracie, entered the early UFC events, he was able to defeat much larger opponents. This proved to the world that size and strength were not what determined a fight’s outcome, but that the most important element was technique.

Sara used these principles when she took down and controlled the armed man. At 15-years-old, she was far smaller than her opponent, yet was able to control his movement and stifle his escape. This is the beauty of martial arts: those with superior technique prevail, regardless of size.

“Martial arts gave me the self-confidence to handle unexpected danger and not panic. Also, [through] MMA training, I’ve learned a lot of techniques which might be useful for self-defense… Self-defense is not about specific techniques, in training we are learning how to face an opponent in a real fight, so in some aspects it is similar to a street fight with [an] aggressor. Of course, the best solution is to avoid a clash but this isn’t always possible.” – Sara Jóźwiak

The International Mixed Matial Arts Federation set up its Women’s Commission in 2020. Its goals include encouraging women to practice MMA, promote gender equality, and enourage women to gain leadership positions in IMMAF and its federations. The Chair of the Commission, Hayzia Bellem, said: “It is our great ambition to highlight the beauty of women in Mixed Martial Arts. Allowing women to show their strength and power sends a great message to future generations.”

There is still some stigma attached to women competing in martial arts, which IMMAF is dedicated to changing. The President of IMMAF, Densign White MBE puts it: “IMMAF is at the cutting edge in developing programmes that engage women and girls to be coaches, participate in all levels in competition including refereeing and judging, to be administrators and the leaders of tomorrow”.

Sara was just 15, but she had the courage, skills, and clarity of mind to stop a violent man. MMA is hugely empowering for women, and IMMAF is committed to engaging as many as possible in the sport.

If you’d like to learn more about how IMMAF is trying to engage women and girls in MMA, Jorden Curran explains the federation’s work in detail here.

*We do not encourage anyone to confront a violent person with a knife. Even a high-level black-belt’s first option should be to run away. Sara did not have this choice.” Statement of Polish police.