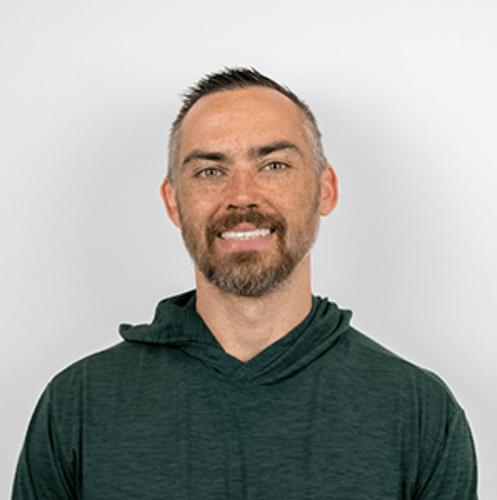 There are more than a few “biofeedback” mechanisms to tell if you’re eating appropriately for your training volume. However, we have found sleep patterns to be one of the earliest signs that you are entering rough water (or are already drowning…).  We’ll start by exploring the connection between training, nutrition and sleep, through a hormone called cortisol.

Cortisol is a hormone produced by the adrenal glands that is highly involved in your stress response. It helps to regulate your metabolism, blood sugar levels, blood pressure, immune system, and… your sleep/awake cycle.  Under normal or healthy situations, cortisol is produced in a circadian rhythm where levels peak in the early morning, helping you to wake up.  From there, the concentration of cortisol drops slowly throughout the day, hitting a low point around the time you should be going to bed. 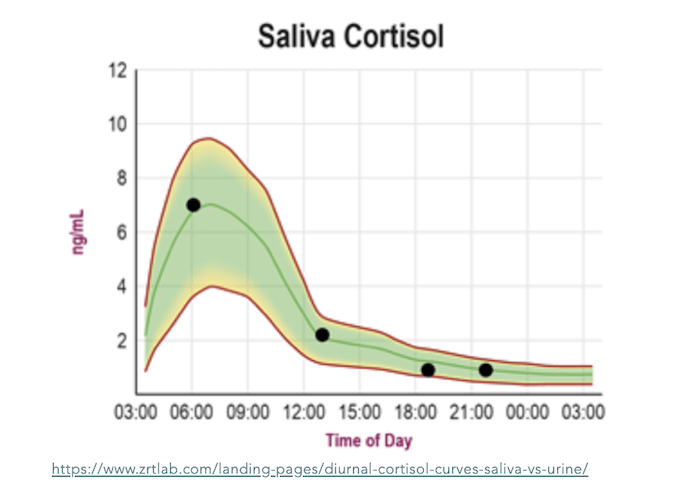 Secondly, cortisol is produced in response to an acute stress as well.  For example, if you were attacked by a bear (extreme example but hear me out) your brain would signal the adrenal glands to produce the “flight or fight” response with adrenaline but it would also produce a significant amount of cortisol.  The problem is that our body and brain have not learned to distinguish between serious life-threatening stresses and every day stresses (such as bills, kids, work, etc) OR your ultra-high intensity workouts.

As a result of these frequent spikes due to every day stress and the daily “bear-attack” that is your 90+ minute training session, the cortisol patterns can become dysregulated.  Thanks to the effects of cortisol on your sleep pattern, this becomes pretty clear when you look at how frequently someone is waking up in the middle of the night, whether they are easily able to fall back asleep, whether they need to pee, etc.

Let’s break down the three most commonly seen issues that we experience as coaches at M2 Performance Nutrition and some of the biology we believe to be behind them. 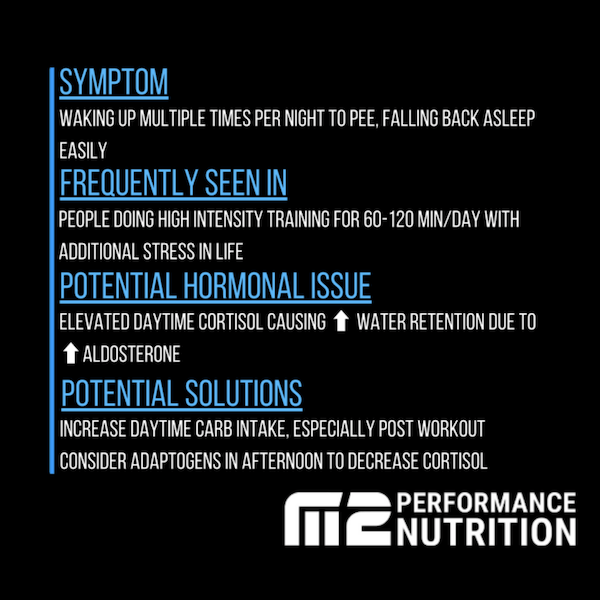 Training high intensity consistently combined with a busy stressful work and home life simply tends to cause an increased level of cortisol across the entire day. One of the things that cortisol does is to regulate the production of another hormone called aldosterone.  Aldosterone controls blood pressure through the modulation of various electrolytes in the blood stream, notably sodium and potassium.  To drastically oversimply things, increased cortisol = increased aldosterone = increased water retention = increased blood pressure.

When your cortisol levels finally drop during the early evening while you’re sleeping, so do the aldosterone levels.  All of the fluid retention that was happening to increase your blood pressure is no longer needed and your body begins to flush it out, hence the multiple trips to the bathroom.  However, since cortisol levels are quite low at this time, you find it relatively easy to fall asleep again (see scenario 2 and 3 for a different story).

The solution to this problem can be as simple as learning to better control your stress and/or decrease the intensity of your training for a while.  However, if you can’t/won’t do that, then there is some evidence that phosphatidyl serine and ashwagandha (an adaptogen) can help.  If it was me, I would take them twice a day (AM and late afternoon). 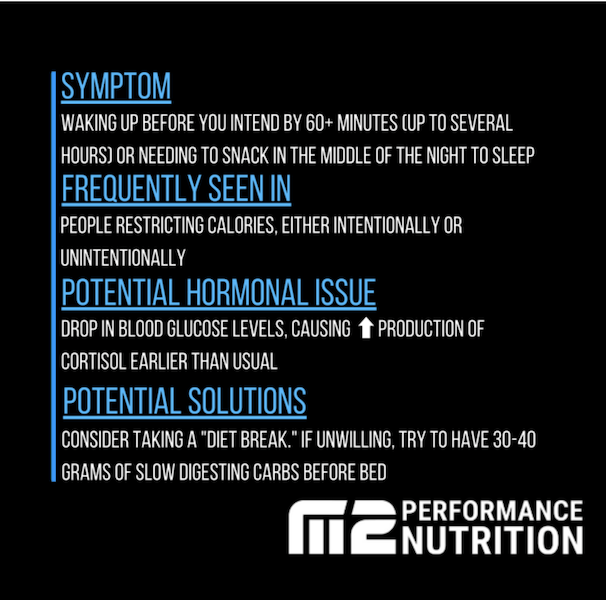 This situation is pretty common in people that are trying to cut weight, but also seen in the early stages of people that are over-reaching or over-training.  One of the things that can cause cortisol to rise earlier than we might want it to is low blood glucose levels.  This makes sense as the body senses the energy deficit and wakes you up so you can go find food and restore the balance.  In fact, spiking blood sugar is a GREAT way to lower your cortisol levels.

The easiest way to solve this problem is to simply eat more food to remove yourself from the calorie deficit.  If for some reason that’s not an option (making weight for a competition as an example) then you can temporarily solve this problem by eating slow-digesting carbs close to your bedtime.  This allows for the intake of glucose from the food, keeping the blood sugar levels in the “normal” level throughout the night ultimately preventing the early rise in cortisol.  Please note that I did say TEMPORARY solution.  At some point, the right decision is to pull yourself OUT of the calorie deficit.

SCENARIO 3: “Houston, we have a problem” 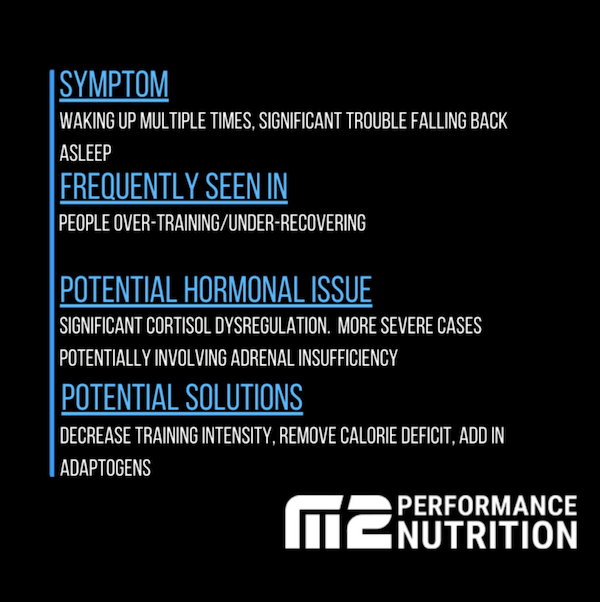 The first one would be significant elevations of cortisol throughout the later part of the day without the drop that is observed in “normal” situations.  Instead, the drop happens MUCH later in the evening.  Sometimes this state is called “tired and wired” as people have significant issues waking up in the morning, but feel wired or wide awake come 9-11 PM and struggle mightily to sleep.  While there are some supplements that could be considered, often the best results come from intentional sunlight exposure first thing in the morning and then at dusk as well.  This sun on skin phenomenon appears able to “reset” the cortisol curve if you do it consistently enough.

The second scenario (which typically is caused by ignoring the first) is actually the significant underproduction of cortisol, sometimes referred to as adrenal fatigue but more accurately described as adrenal insufficiency. Chronic fatigue, poor recovery, low sex drive, slow heart rate and brain fog are all symptoms that accompany this state.  There is no easy solution for this situation.  You need to remove yourself from the stress as much as possible (reduce training volume and intensity).  Additionally, one could consider adding in adaptogens (rhodiola, holy basil, astragalus, etc) zinc and eating a beta-carotene rich diet in the morning as well however these are simply SUPPLEMENTS to the real solution which is rest and recovery.  Hopefully learning the early signs of cortisol dysregulation will prevent you from ever reaching this state.

Hormones are an incredibly complex topic but an incredibly important one.  Getting actual lab tests back will ALWAYS be the best way to define and issue, however these tests can be rather expensive.  A first step can be to look at your biofeedback, such as sleep disruption, and try a few simple changes to your stress reduction routine (meditation, increased fueling, appropriate rest days, etc) before deciding that formal blood (or in this case saliva) analysis is necessary.

If you want some help in guiding these tricky waters, please reach out to us at M2 Performance Nutrition.

Disclaimer: The opinions stated in this article are not to be interpreted in any way as medical advice. Always follow the guidance and instructions from your doctor first and foremost.