Webinar with Jason Sheilds
The Mindset of Champions 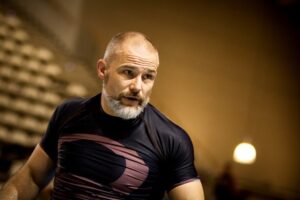 The ‘Champion’s Mindset’ is a notoriously elusive thing. One day we feel fantastic and like we can take on the world, the next we feel like we can’t do anything right. We fight like champions in the gym, but come the competition we start to doubt and stumble and we ‘don’t show up’ mentally. This is the heartbreak of so many competitors who have so much to give but seem to get in their own way when it’s time to shine.

Dr. Jason Shields is a master of mindset, and for this webinar will teach us about the belief systems that make or break a champion and the difference between motivation, inspiration and making it happen. He is going to show you how to hack your greatest power centre and how to align yourself to reach any goal to fulfil your maximal potential.

Dr. Jason Shields was born in Lovington, New Mexico and has traveled extensively, living in the USA, Italy and Norway. Educated as a biologist his love for physiology and functional medicine lead him to pursue qualifications as a doctor of Chiropractic.

His parents, Tom and Donda, gave him the gift of meditation at the age of 5. Tom taught him to think and achieve. And his grandfather Lafayette Green Pool (the real life “War Daddy” portrayed by Brad Pitt in the movie “Fury”—he survived that siege at the end of the movie, by the way) taught Jason about strategy and tactics and the difference between the two.

Since moving to Norway he has co founded 3 successful businesses, as well as Frontline Academy Voss, and coached, mentored and trained winning athletes in 6 sports. He has had responsibility for the physical preparation and biomechanic evaluation for athletes ranging from local soccer teams, to professional cyclists, World Champions in BJJ, and Olympic gold medal winners.

Jason is also an active brown belt competitor in BJJ under the great Ricardo Liborio, Eduardo “Teta” Rios, and Andre Porto De Caravalho. He has Master World Titles in Blue and Purple Belt and No-Gi World title in Brown Belt. He has won European titles in his weight and absolute in No-Gi in every belt up to Brown. He has never been submitted in competition, Gi or No-Gi, and as a Purple Belt did not lose a single point in the gi. Jason has never lost a single point in No Gi to an opponent.

The titles are all a credit to his excellent lineage in BJJ, high level physical preparation, mental skills, nutritional follow up, chiropractic treatment, and his unique perspective in BJJ. Now he wants to share this with the world.